We have sold more lanes of Spectrim for citrus than any other category including the single largest Spectrim install to Fowler Packing. Clear rot detection has been a difficult challenge for a lot of these packers with the only reliable method being manual graders in a UV tent. We are now releasing an additional IR wavelength for citrus packhouses that will help overcome this age-old problem. By using Spectrim for clear rot you can reduce the dependence on UV rooms resulting in a lower cost-per-pack, increased throughput and most importantly, more consistent products.

From my conversations with citrus packers, the biggest cause of shipment 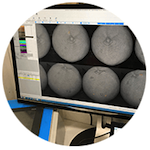 rejections and losing good fruit is post-harvest decay – primarily clear rot that develops into green and blue mould. These rots present a major problem in citrus for two key reasons: 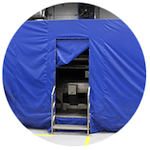 The current solution that most packhouses rely on for decay grading involves manual graders in darkrooms where UV light is used to detect the clear rot. The science of this works by identifying the decay that breaks down the peel. The UV-fluorescent flavone tangeritin moves closer to the peel surface making its fluorescence visible to human graders.

This approach presents a number of challenges because (a) it depends 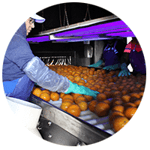 on the peel being damaged enough to expose the tangeritin, (b) other forms of peel damage can also expose the tangeritin, and (c) it doesn’t work for lemons. It also presents logistical complications of having to slow down the line during heavily defective crops, having to trade off UV light rot detection with white light split detection, and relying on the inherently subjective human eye to grade.

All of this presents a compelling case for a more consistent and accurate solution.

By combining Spectrim’s consistent lighting, powerful imaging and machine learning with two infrared wavelengths (one never before used on citrus), our application engineers have successfully demonstrated the ability to identify clear rot damage. With the help of validation partners in California and Australia, the team have been working to determine how effective Spectrim is.

The results show that the infrared wavelength in Spectrim CIR is good at picking up developed clear rot on mandarins and oranges, which was at about the level that you would expect from an engaged and alert grading team in a dark room. Similar accuracies were achieved in lemons, which was already an improvement over manual grading as they don’t fluoresce in UV rooms.

However, the best results were achieved with the addition of a second infrared wavelength. The combination of these two wavelengths alongside our state-of-the-art machine learning algorithms (discussed in our behind the scenes video), demonstrated that we are now able to remove clear rot to a more consistent standard than humans in UV rooms. This was primarily by being able to see small and early stage rots - some nearly impossible to identify by the human eye.

My favorite story from the testing was from our citrus expert, Chris Johnston: “Their QC brought me a handful of perfect looking mandarins that Spectrim had culled and was concerned that we were rejecting export grade fruit. After shining a bright light through the fruit and seeing only some very small areas of cell breakdown, we decided to leave the fruit on the bench to see. Sure enough, two days later there was very obvious clear rot!”

Value for the Packhouse

As a product manager, my question is always “how much value is this actually adding for our customers?” It’s clear that improving labor utilization will reduce the cost-per-pack, which is an important metric for any packhouse, but this isn’t the most important value that Spectrim delivers.

Reducing the dependence on the human eye isn’t just about being able to reassign staff to non-automated tasks. It’s also a matter of quality and consistency – we all know that human grading is subjective and changes hour-by-hour and person-by-person. Spectrim can provide an objective standard for grading all day every day. Additionally, this prevents having to slow down a line due to low-quality fruit; this loss in efficiency is often comparable to more than 20% downtime, which would be considered a major problem in any shed!

During storage and shipping, clear rot matures into very obvious blue or green colored mould. This increases the risk that shipments will be rejected on arrival, as the rot has developed enough to be visible and will have often spread to other fruit. This obviously leads to lost revenue and increased costs, but more importantly can also impact brand loyalty and future sales.

For me, the big takeaways from this are that we are only starting to see what Spectrim can achieve, and our future-proof platform is already delivering value as the new wavelength module can be added to existing systems. As discussed in my blog on the importance of investing in a platform, this is a prime example of how all Spectrim customers will have access to new technology as it comes available.