Integration: the fourth industrial revolution in the fresh produce industry

Packhouses are packing more produce, more efficiently, than they ever have before. These productivity gains have come about through bigger, better, and more sophisticated machines from a range of different vendors, with Compac leading the charge in sorting and inspection systems.

But the next step-change in productivity for packhouses will come from integration software. Software that can manage the interaction and handovers between the highly complex machines that exist throughout the packing line. Software that tailors machine control to the current situation. Software that monitors how a line is being run and tweaks speeds and reallocates produce because it knows it can increase throughput by 5%. Software that knows what is selling and makes its own packing schedule to deliver the right amount of boxes, of the right type, to the right customer. Software that can run a packhouse without any human intervention; a packhouse where you wouldn’t need to turn on the lights.

Major industrial automation companies, with the strong backing of their governments, are coming out in force to push “The Fourth Industrial Revolution” (or Industrie 4.0) in Germany and the Industrial Internet of Things (IIoT) in the US. Integration through software is their core principle and a strategic direction for Compac is to bring these state-of-the-art concepts to fresh produce packing.

The first step is starting to bring all of the disparate software systems and machines in the packhouse together through a common infrastructure.

This means that machines in the packhouse need to start talking to each other. For example, when the average produce size changes quickly, the materials handling system could predict a bottleneck and communicate this back to the sizer, which would automatically open more outlets for the prevailing size peak, or in an unworkable situation tell the riser conveyor to slow the flow of produce. This could prevent a line stoppage while still maximising throughput.

The different software systems in the packhouse also need to start sharing information. For 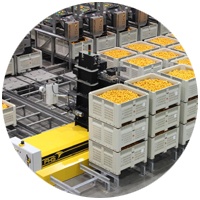 example, if a machine breaks down, product and throughput data from our sizer could be combined with price data from the ERP to quantify the dollar cost of the breakdown based on what produce is being packed at that point in time. Accurately quantifying the cost of a breakdown can help inform investment cycle planning, set operational KPIs, and provide more transparency for the head office.

Connecting all of the systems and machines in the packhouse together is a prerequisite for fully automated packhouse operations. However, looking out into the future integration won’t be limited to the four walls of the packhouse; the whole fresh produce value chain will benefit.

IIoT, Industrie 4.0 and Big Data promise an imminent shake-up in industrial automation which will materialise over the next 5 to 10 years. While PLCs will continue to dominate in the near-term, the cost of embedded microcomputers is plummeting while their performance skyrockets. Wireless communications technologies are becoming more reliable, faster, and more secure, while sensors are becoming smaller, cheaper, and smarter. When these technologies combine, the performance and cost means the ROI cannot be ignored.

If the data infrastructure is designed properly, sensors like this can be added seamlessly and it won’t matter where the next bit of data comes from. Imagine a packing line where hundreds of new sensors could be added to the line, securely, without needing to buy new software to unlock the insights in their data.

For example, data from a new accelerometer combined with data from the quality control system could be used to explore how the infeed conveyor speed affects the rate of fresh bruises. Then we could add vibration sensors to every motor that would alert a maintenance engineer when any motor needs attention. Since the cost of these sensors is so low, storing data is so cheap, and there are tools that don’t care how much data they’re analysing; we can put sensors on everything to collect every piece of data that might be relevant to the business.

This data, when fed straight into powerful analytics platforms will empower packhouse leadership to make better decisions in the short term, and to automate these decisions in the long term. It will unlock the maximum potential of your existing machinery to improve productivity, drive down the cost per pack and push up throughput.

The fourth industrial revolution is a digital revolution, and Compac is committed to leading this transformation in the fresh produce industry.